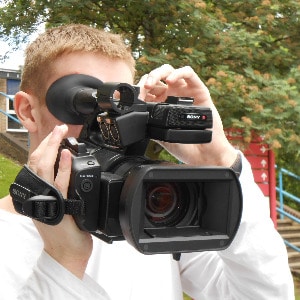 Christopher Nolan is one of the most acclaimed and popular filmmakers this century. Josh Greally has dived into Nolan’s back catalouge to rank his movies, worst to best.

Christopher Nolan is one of today’s most beloved directors. His inventive storytelling, commitment to practical filmmaking (using practical effects in his films wherever possible and shooting on actual film stock) and his ability to make big ideas accessible to a mainstream audience have made him a commercial and critical success. But what is his best film? Lets take a look…

Nolan’s debut film features many motifs he would refine and reuse throughout his career. It uses a non-linear narrative, has themes of lies seducing people and features an obsessive main character. We follow a writer who, suffering writers block, follows people to learn about their lives and, hopefully draw inspiration from them. Naturally, one thing leads to another, and he finds himself involved in illegal activity with an enigmatic man named Cobb who sets the man up for a crime he himself committed. While it doesn’t have high production value, world class acting or high personal investment, for a film made for only around $6000 Following is a great demo for Nolan as a filmmaker. It keeps the narrative small scale, and tightly focused with nothing distracting from the story. While the characters aren’t as fully realised as later Nolan films, they have enough personality to keep you invested and the interesting narrative choices as well as short run time make it an enjoyable experience.

Interstellar is two-thirds of a great film. The setup of earth and humanity falling apart and traveling to space being our last hope is inventive, engaging, and classic Nolan. The journey’s to distant planets are creative and the repercussions it has on the characters hits hard, despite the occasionally-blunt dialogue. But then, the film tonally shifts from pessimistic hard science fiction to sci-fi adventure, using love as the solution to the problems. For this writer, this shift hurts the film, trivialising the stakes. Which is a shame because so much of Interstellar is wonderful. Matthew McConaughey, Anne Hathaway, Jessica Chastain, Michael Caine, and Mackenzie Foy wring every ounce of emotion and dramatic tension out of their scenes. The effects and direction are awe-inspiring, creating an impressive scale while also feeling grounded and real and Hans Zimmer’s score is, as usual, simply amazing. It’s unfortunate that some storytelling cracks make Interstellar less than, er, stellar.

Tenet  follows ‘The Protagonist’, played by John David Washington, who helps a mysterious organisation investigate a series of anomalies (including bullets traveling backwards through time) and eventually uncovers a plot a plot that could destroy the world. Nolan is a talented character writer, no question, and has often unfairly been accused of putting plot before characters but, in Tenet, those criticisms are fair. The characters exist almost solely to serve the mystery, but the stakes needed to involve us in the mystery are either too vague (or complicated) to invest in. The plot and exposition-heavy dialogue soon becomes tedious and the soundtrack (Ludwig Göransson) overpowers everything to artificially inflate excitement. Tenet isn’t bad, the action is fun, and the acting is fine, with Kenneth Branagh the standout as Bondian villain Andrei Sator. But it’s frustratinly difficvult to engage with and, compared to the quality of Nolan’s catalogue, among his poorest.

In The Dark Knight Rises we find Batman pulled out of retirement to deal with new villain (Bane, played by Tom Hardy) who quickly begins exposing Batman’s weaknesses – both physical and mental – and forces him to come to terms with his own limitations and save his city with the ultimate sacrifice. Rises is a thematically rich, well-constructed blockbuster backed by gorgeous cinematography; a heart pounding score and always has something to keep you intrigued and engage, be that high-scale action sequences or interplay between characters old and new. All of the returning cast do great work – Anne Hathaway and Joseph Gordon-Levitt provide intriguing new perspectives as Selina Kyle and Detective Blake – and Bane is a fantastically intimidating villain. Some of the twists aren’t entirely necessary, perhaps, but they all lead to a more than satisfying series finale.

Nolan’s telling of the Batman origin story, Batman Begins is a great opener to the Dark Knight series film. Featuring a likable lead in Christian Bale’s Bruce Wayne/Batman, a fleshed out supporting cast, a solidly-plottted story with themes of overcoming fear and the power of deception, and a standout score from Hans Zimmer and James Newton Howard, there’s an awful lot to like. But there are flaws. To this writer, Bruce’s training sequence feels too climactic for the point it comes in the story, creating a discord in the narrative. The serious tone also, at times, conflicts with what Nolan shows us – presenting highly fantastical moments and wanting us, the audience, to buy them as credible. Also, Katie Holmes is rather flat as Rachel Dawes, deflating her romantic tension with Bruce. But, it was an enormous hit, put the CAped Crusader back on the cinematic map with a bang and created an appetite in audiences for comic book movies that is yet to be sated.

A remake of a 1997 Norwegian thriller, Insomnia is Nolan’s most underrated movie. The first half follows FBI investigator Will Dormer (Al Pacino), his partner and the police of a small Alaskan town headed by Officer Ellie Burr (Hilary Swank) as they try to solve a young girl’s murder. With Dormer currently under internal investigation, he must be more restrained or he risks his previous arrests being called into question. But, midway through the second act, Insomnia changes into a thrilling character study after Dormer does something terrible and becomes involved with the killer. The plot always keeps the audience guessing and poses some serious moral questions. The cast, also including Robin Williams in a sinisterly dramatic role, are uniformly fantastic. And DP Wally Pfister provides some moody cinematography that gives the film a cold and isolated feeling. It’s not quite as impressive as the next few entries but remains criminally underappreciated.

Speaking of engaging thrillers, Memento is a puzzle box of a movie. Utilising a fractured, non-linear narrative to tell the story of Leonard (Guy Pearce), a man who cannot create new memories, searching for his wife’s killer. From the opening seconds, you’re pulled into the narrative with many questions and, as the timeline rockets back and forth, we begin to feel the same frustration and longing for truth that Leonard does, putting us firmly in the protagonist’s shoes. Even without Nolan’s unique storytelling techniqiues, Memento would still be an engaging thriller thanks to some great performances (particularly Pearce, Carrie-Anne Moss and Joe Pantoliano), a tense score, and some wonderfully inventive writing, full of great characterisation and thematic resonance.

Depicting the historic Dunkirk evacuation fom the Second World War from three perspectives: the Allied soldiers trapped on Dunkirk beach, the civilian boats heading to their rescue them from Dover, and the spitfires defending them from enemy planes, Nolan chooses to deemphasise traditional character journeys. Instead, he focuses on the rescue effort mechanics and survival. Dunkirk‘s characters are not characterised beyond their drive to survive and what we soo on the screen but, unlike in Tenet, where lack of character proves a hindrance, here Nolan uses it to his advantage. Dunkirk isn’t a story of the indivudual – it is a tale of hope, freedom, and a nation coming together in a time of universal need. Aiding this are the naturalistic physical performances which convey so much through so little. With the great sound design, accompanied by Hans Zimmer’s tense, rising score score doing all it can to heighten audience tension for the next attack (some WWII veterans said the action scenes were louder than the real events), Dunkirk is, in its best moments, a masterclass in combining spectacle with suspense. Some viewers may not like the untraditional characterisation and the potentially confusing nonlinear narrative, but Dunkirk is one of cinemas best depictions of the chaos of war.

Adapted from Christopher Priest’s 1995 novel of the same name, The Prestige is proof of Nolan’s mastery when it comes to balancing plot and character. After Alfred Borden’s (Christian Bale) overambition kills his fellow stage magician Robert Angier’s (Hugh Jackman) wife, the two illusionists enter a ferocious game of one-upmanship, each trying to outdo the other in a race to acheive the ultimate prize – the Transporting Man magic trick. Nolan’s writing creates two leads depth and nuance, brought to life by two great performances from Bale and Jackman, and accompanying them are excellent supporting turns from Michael Caine (of course), Andy Serkis, David Bowie, Scarlett Johansson, and Rebecca Hall. The only problems are the female characters feel more like motivators for the male leads rather thanfleshed-out  characters with their own agendas, and the narrative twists and turns as we hurtle towards the climax occasionally do stretch credibility at time. But, overall, The Prestige is a marvellous piece of work, a fantastic book-to-movie adaptation, and easily among Nolan’s best.

Inception takes a stellar cast and crew on a heist mission like no other, as a creative crew work to seek to manipulate a business mogul’s son to dissolve his father’s company. How? By diving into his sleeping unconscious and battling through his mental defences to implant an idea deep in his mind. This killer premise combines a fantastic cast (Leonardo DiCaprio, Ellen Page, Joseph Gordon-Levitt, Tom Hardy, Marion Cotillard and more), a script that balances character work and world building wonderfully, inventive direction that effectively blurs the line between what is and isn’t real, and an  oft-imitated Hans Zimmer soundtrack, to create something unique, interesting, and gnerally astonishing. There are some flaws – there is an occasional overreliance on dialogue to communicate ideas and motivations, and some moments in the finale seem to contradict the rules the film set but, in all Inception is one of modern cinema’s most imaginative blockbusters.

The Dark Knight has possibly become the definitive Batman movie for an entire generation of movie-goers. And it’s not difficult to see why. Heath Ledger’s now-legendary  interpretation of Joker, is acclaimed as one of the great movie villain performances – frightening, darkly funny and utterly captivating. But, surrounding him are incredible creatives at the top of their game: returning and new cast members perfectly fit their roles, Nolan’s never-better direction weaves action, drama, suspense, and horror seamlessly together, the screenplay creates fantastically relatable characters, instantly quotable dialogue and thoroughly explores themes of order, chaos, and their effect on humanity. Hans Zimmer and James Newton Howard’s score is perfectly utilised. The Dark Knight still thrills and inspires debate over a decade later. It is Nolan’s masterpiece.

What do you think of this list? Is The Dark Knight overrated? Is Tenet a not-yet appreciated masterpiece? Let me know your personal rankings, thoughts and favourites in the comments.